“The language on both sides needs to be deescalated to give a political and diplomatic situation its best option.”

Sen. Cory Booker (D-NJ): “At a time when President Trump’s rhetoric is growing increasingly belligerent and his foreign policy decisions are becoming even more erratic, this bill reaffirms Congress’ authority and provides a critical safeguard to help keep the President from launching the United States and our servicemen and servicewomen into a pre-emptive war of untold magnitude and destruction. This important legislation clarifies that the President’s authority to defend the United States from an imminent threat or attack cannot be stretched to include starting an unprovoked war with North Korea.”

Sen. Tammy Duckworth (D-IL), Combat Veteran: “A preemptive strike against North Korea could be catastrophic for the nearly 80,000 American servicemembers who are stationed in the region and for the tens of millions of innocent human beings who live on the Korean Peninsula. We need our nation’s Commander-in-Chief to show a steady hand and sound judgement, not to engage in irresponsible and dangerous verbal attacks that only serve to escalate an already dangerous situation and put American lives at risk. As the drums of war beat louder each day in both the White House and the Pentagon, I am proud to stand alongside Senators Murphy, Booker, Schatz and Sanders to ensure those in power understand the true costs of war – not just in dollars and cents but in human lives – before they consider starting a conflict that could lead to widespread devastation.”

Sen. Chris Murphy (D-CT): “We need to take the president seriously when he threatens war, because the dam could break at any moment. Republican and Democratic Senators are alarmed over the path we’re on, and it’s important we join forces to reclaim Congress’ constitutional role in matters of war and peace before there’s no turning back. This bill shouldn’t be controversial since it essentially restates current law, but Congress needs to make it crystal clear that the President does not have the authority to take preemptive military action in North Korea without congressional consent.”

Sen. Bernie Sanders (I-VT): “Clearly we have got to do everything that we can to prevent a nuclear war which will likely cost the lives of millions and millions of people. Congress has an enormously important oversight responsibility in matters of war, and this legislation blocking a preemptive strike against North Korea is an appropriate step in fulfilling that responsibility.”

Sen. Brian Schatz (D-HI): “Our bill makes it clear that the president does not have the authority to engage in preventive war without approval from Congress, and it goes so far as to tie the purse strings so that the president will have to ask for Congressional approval before taking any preventive action. I want to emphasize what this bill does not do. It does not limit the ability of the United States to protect our allies. Japan, South Korea, and every other ally of the United States should rest assured that we stand with them, and we will have their backs.”

Sen. Edward Markey (D-MA), Ranking Member of the Senate East Asia, the Pacific, and International Cybersecurity Subcommittee: “President Trump’s provocative and escalatory rhetoric, with threats to unleash ‘fire and fury’ and ‘totally destroy’ North Korea, cannot be allowed to turn into reality. As long as President Trump has a Twitter account, we must ensure that he cannot start a war or launch a nuclear first strike without the explicit authorization of Congress. It is time for the legislative body to act and reassert its constitutional role as the branch of government with the sole power to decide when the United States goes on the offensive. I thank Congressman Conyers for his partnership on this legislation and will continue to press for a diplomatic solution to the threat of a nuclear North Korea.”

Sen. Jeff Merkley (D-OR): “The President’s erratic, blustering approach to North Korea has created a huge risk of stumbling into a disastrous war. A preemptive strike on North Korea would immediately be met by retaliation that could kill tens of thousands of South Koreans as well as many Americans within hours. This outcome is unacceptable. We need to make sure that Congress exercises its constitutional responsibilities to prevent profound and destructive misjudgments.”`

See also: Rep. Ted Lieu (D-CA) and 16 fellow members of Congress who served our nation in the military release statement on the dangers of a ground invasion in North Korea. 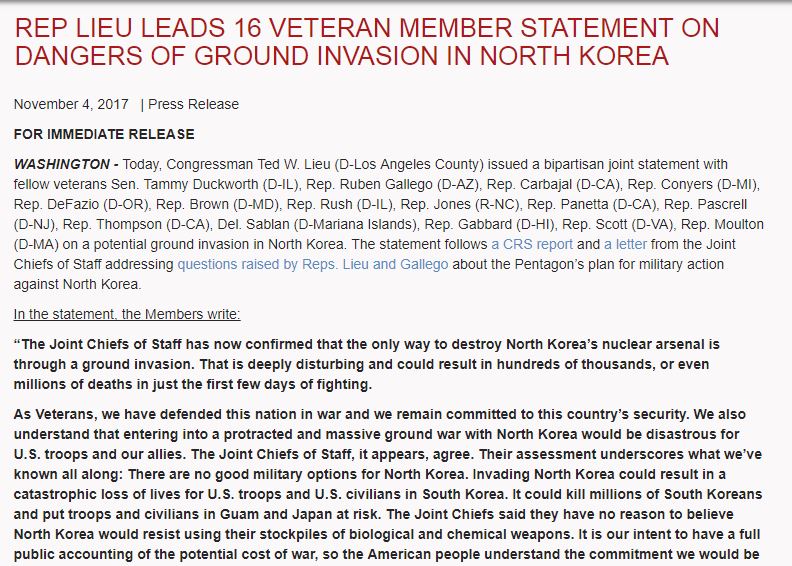 Reimagining U.S. Security Spending For The 21st Century & Beyond

Did Your Member of Congress Vote for Endless War?