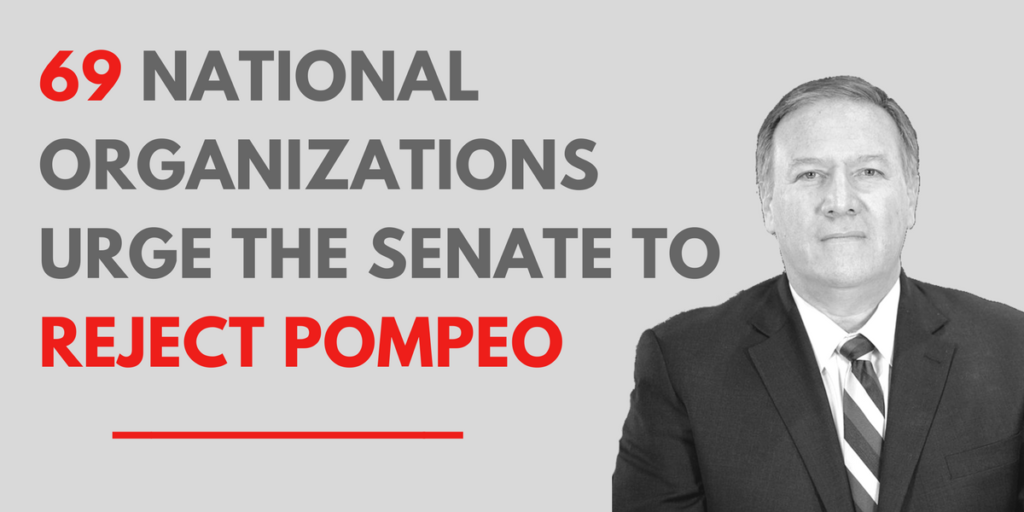 UPDATE: Since April 10, 2018, one additional group (The Nation) signed on, making it a total of 70 national organizations who have signed on to this letter.

On April 9, 2018, Win Without War joined 68 other national organizations in sending a letter to the Senate urging opposition to Mike Pompeo for Secretary of State. The letter states, in part: “Pompeo’s […] repeated advocacy for war, Islamophobia, climate change denial, hostility to human rights, including reproductive and LGBT rights, and support for torture make him dangerous and unfit to be a chief architect of U.S. foreign policy.”

The organizations on the letter collectively represent tens of millions of Americans and a broad cross-section of communities throughout the nation and include groups focusing on foreign policy, civil rights, climate, human rights, faith, labor, immigration, development, and public health, among other issues.

The full text and list of signers is below and a PDF version of the original letter can be found here. You can also read initial reporting here.

We are writing to express our strongest opposition to the nomination of Mike Pompeo as Secretary of State. Our organizations collectively represent tens of millions of people across the United States.

Pompeo promotes principles and policies that are antithetical to American values. His repeated advocacy for war, Islamophobia, climate change denial, hostility to human rights, including reproductive and LGBT rights, and support for torture make him dangerous and unfit to be a chief architect of U.S. foreign policy.

Make no mistake: President Donald Trump is assembling a War Cabinet with Mike Pompeo at the helm. Our concerns are only further heightened with the recent appointment of John Bolton as National Security Advisor, a man who shares many of the same dangerous and disturbing policies and positions as Pompeo. There is no doubt that the Senate would have blocked the nomination of Ambassador Bolton to any Senate-confirmable position, and they must not now allow his radical and extreme agenda to be implemented by having Mike Pompeo join him in Donald Trump’s cabinet.

After two costly, bloody wars in Iraq and Afghanistan, it would be a national folly to put advocates for another major war in charge of U.S. foreign policy. The costs would be devastating for civilians around the world, U.S. soldiers sent to war, and our national treasury. To preserve America’s global standing and advance our national interests, U.S leaders must champion human rights and continue to promote global development and diplomacy.

Pompeo is unfit to serve as Secretary of State. We urge you to oppose and reject his nomination.

About Face: Veterans Against the War

Council for a Livable World

Friends of the Earth U.S.

Herd on the Hill

United for Peace and Justice

Did Your Members of Congress Vote to Cut the Pentagon Budget?

5 Key Demands: U.S. Foreign Policy in the Face of the Coronavirus