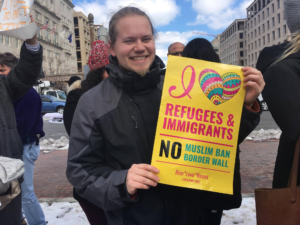 Wesley Wright is a former intern at Win Without War. He is a recent graduate from Hope College in Holland, MI with a double major in International Studies and Political Science. Wesley is passionate about grassroots movements, conflict prevention/resolution, and human rights.
If you read the news today, you would think that the world is heading toward a great abyss of no return. In this increasing uncertainty, President Trump has proposed a budget that relies almost exclusively on the military to solve all of America’s foreign policy problems. However, this emphasis on Pentagon will not make America safe or great. If we really want to look back to a time when America did something great, we should look to the Marshall Plan and the aftermath of WWII when the US invested billions of dollars into helping Japan and Europe recover and develop into the close allies we have today. It is that model that can provide solutions to today’s most difficult foreign policy problems.
Out of all the assets that America has in its foreign policy tool kit, perhaps the most effective (and most overlooked) are aid and diplomacy. Despite their critical importance, however, these programs are an incredibly small part of the US budget and are chronically underfunded. One would think the budget for these tools couldn’t get any smaller, but they would be wrong. Just last month, President Trump proposed an insecurity budget that would expand the Pentagon budget by 10% while the State Department and development programs would decrease by a drastic 29%. Not only is this proposed budget strategically unwise for national security, it is morally disgraceful.
To understand the strategic benefits of aid for national security, one need look no further than what our military leaders have to say about it. More than 120 retired US generals and admirals explained in a recent letter that many of the crises the US faces cannot be solved by the military alone, and that the State Department, USAID, Peace Corps, and many other agencies help prevent putting troops in harm’s way. Even Defense Secretary Jim Mattis has said that, “If you don’t fund the State Department fully, then I need to buy more ammunition ultimately.”
Additionally, aid targets the sources that cause violent instability. These smart investments in prevention could also ultimately save billions of dollars by preventing the need for later military interventions. In fact, studies have shown that the cost of preventing conflict is 60 times less expensive than the cost of military intervention.
While it may seem that spending more on the Pentagon budget will make us more safe, the sad reality is that the Defense Department cannot guarantee that money will be spent wisely. In 2015,  the Defense Budget Board outlined cost cutting measures that could save the Pentagon $125 billion. Yet, rather than implement these reforms, the Pentagon buried the report and cried out for more money..Even Sen. John McCain (R-AZ), Chairman of the Armed Services Committee and an unabashed champion of an ever larger military budget, recently published a scathing report that outlined $13 billion in Pentagon waste. Simply put, with the current reckless spending habits at the Pentagon, we have no reason to believe that tens of billions of dollars in additional taxpayer money will not be similarly wasted.
To make things even worse, this immoral budget proposal is coming at a time when the world is on the precipice of a major global humanitarian catastrophe. Four countries – Nigeria, South Sudan, Somalia, and Yemen –  are all on the brink of famine, and millions of lives are at risk. The UN has said that it needs $4.4 billion to prevent these famines from killing millions of people; it has only received 10% of what needs thus far.
The world is also witnessing some of the most catastrophic conflicts which have created millions of refugees and internally displaced persons. The notion that more Pentagon spending at the expense of foreign aid will solve these problems is delusional and dangerous. Whether we accept it or not, the well-being of the US is now intertwined with the well-being of the rest of the world, and our security at home depends on addressing this global instability.
Simply hoping Donald Trump sees the error of his ways and abandons his plans to throw money at the Pentagon while cutting our investments in aid and diplomacy is probably a lost cause. But thankfully, we have the power to force the change we want to see, to demand that our tax dollars are spent making America and the world safer, not simply padding the pockets of Pentagon contractors. In the coming weeks, Congress will be debating these very issues and the question is whether we will make our voices heard.
We have the power to do good in this world, and we know what has to be done. Will we have the courage and thoughtfulness to do so?

Did Your Members of Congress Vote for Endless War?